As the formal lead on the neighbourhood planning process, the Parish Council will be discussing the draft document at their next council meeting.

After this, we anticipate starting the first round of formal community consultation on the document in the Spring.

Have your say on the Pre-Submission Draft Plan

Once the community consultation is officially launched, there will be lots of opportunities to read the Pembury Neighbourhood Plan and submit your feedback:

This formal consultation is a big milestone in the process. Not only will we be gaining feedback from the community, but also from a range of statutory consultees including Historic England, Natural England, the High Weald Area of Outstanding Natural Beauty Unit and the Environment Agency.

All of the comments received will need to be carefully considered by the Steering Group and the Plan amended accordingly.  It will then be formally submitted to Tunbridge Wells Borough Council, who will then undertake a second round of formal consultation. After this, an independent examiner will be reviewing the document to make sure that it meets the legislative requirements.

We will then hold a local referendum on the Neighbourhood Plan which, if successful, will mean that the policies contained in the Plan will be used to help determine planning applications in the Parish.

Excellent response to the second community survey and mapping workshop

We launched our second community survey just before the summer to gather detailed information on specific topic areas and, in total, we received 160 responses. We also held a community mapping workshop with over 20 people attending. The information gathered will help the Neighbourhood Plan Working Group volunteers to finalise the evidence base for the Plan. A full report of the findings is available.

Housing: Of those wishing to move within the next 5 to 10 years, most of you said that you would like to stay in Pembury, either to set up a new home or be able to downsize, with two and three bedroom houses or bungalows being cited as the most sought after. The main challenges faced, though, include the lack of affordable homes in
Pembury and the fact that most homes tend to be on the larger side. We plan to address this in the Neighbourhood Plan by supporting the provision of smaller homes, in terms of number of bedrooms, within new developments. We will also push for a greater number of affordable homes as part of the sites allocated in the Tunbridge Wells Local Plan, particularly for first time buyers, those with a local link to Pembury and key workers in the parish.

Design of new houses: We commissioned a Design Guide for Pembury to provide information about what new housing in the parish should look like, the styles and materials to incorporate and how to ensure it is environmentally friendly. You can read the guide on the Parish Council website.

Local facilities: While older people and younger children are well catered for in the parish, you told us that we need to offer more for teenagers and younger people. The sorts of facilities requested include somewhere for teenagers to spend time and socialise, a café and toilets at the recreation ground, a community garden, and facilities like a skatepark. We will use the Neighbourhood Plan to try and achieve some of these ideas.

Green spaces and nature: Most of you told us that having access to natural green spaces in and around Pembury was very important. Many of you mentioned the woods, the village green and the recreation ground. Our Neighbourhood Plan will help us to protect particularly special green spaces (for instance, ones which are used for recreation, or which are particularly beautiful). We will also identify areas that can be improved for plants and wildlife, such as the ponds and orchards. Finally, you pointed out numerous views and viewpoints that are special including views across the Weald to the North Downs, views of the village green and views of the sunset from the ridge at the south of the village, and we will use the Neighbourhood Plan to protect these.

The village centre – Whilst the local shops and independent businesses are very much valued, many of you raised concerns about the lack of parking spaces in and around the village centre and the need for more usable cycle paths. The Neighbourhood Plan will include support for better cycling routes and there may be opportunities to extend parking provision near to the village hall.

Getting around – Our footpaths are very popular, and the Parish Council is currently updating the Pembury Footpath Map. There are areas, however, where improvements can be made to paths and new linkages formed between paths. Our Neighbourhood Plan will help to achieve this.

Views from Pembury School Children – We asked the primary school children to share their top three wishes for Pembury and received some fantastic ideas:

Benches / Litter picking / Nature Reserve / Protect our Green Spaces / more buses / Shade in the Park / Respect for the area / Cycle paths / a new slide in the park / protect our woods /Walking / More rubbish bins / rules for the park / graffiti competition /somewhere to store bikes / we like the outdoor gym / cafe and toilets.

What happens next?
The Neighbourhood Plan Steering Group and volunteers are now finalising the Neighbourhood Plan document. When ready, we will be consulting on it with the community so that we can get feedback on the proposed policies. We will then update the document and hand it to Tunbridge Wells Borough Council, who will run a second consultation, before the Plan is reviewed by an independent examiner.

We hope to have a local referendum on the Neighbourhood Plan next year which, if successful, will mean that the Plan will be used to help determine planning applications in the Parish.  It’s not too late to get in touch with us if you want
to have your say on the future of Pembury or find out more about the Neighbourhood Plan. Please contact us at: ndp@pemburyparishcouncil.gov.uk

What you told us about Pembury…

Thank you to everyone who filled in our online survey about Pembury! We had a brilliant response with over 140 households telling us their views.

We asked you what you like most about living here and the overwhelming feedback was the village atmosphere, the friendliness of the local community and our beautiful rural setting, with over half of you mentioning these points. You also pointed to the good range of local facilities and amenities, with particular mention given to the school, local shops and the pubs. Our location too received a lot of attention, being well-placed to access the main road network as well as railway stations not too far away. Finally our extensive network of footpaths and twittens have clearly been heavily explored during the lockdown periods, as many of you wrote about these and the views and natural features that can be found en route.

Our second question looked ahead to the future, and what we might need to do to keep Pembury special and improve it further. Perhaps unsurprisingly, there was a host of comments relating to traffic and car parking (or lack of). Lots of you asked for more to be done to reduce speeding, possibly introducing traffic calming measures, as well as discouraging cars from parking on pavements.

We also received lots of comments about the need for more activities and facilities, particularly for younger people in the parish – ideas included a café at the rec, resurfacing the tennis courts, an off-road bike track and skateboard area, as well as places for teenagers to meet safely.

Thinking of future growth of the parish, concerns were raised about making sure that any new housing meets local needs – for instance houses for those wishing to downsize, as well as affordable homes for those starting out on the housing ladder.

Congratulations to Ryan Bull whose name was randomly drawn from all those who completed the survey. Ryan has won a £25 voucher!

Developing a vision for the parish

Following on from the online survey, the Neighbourhood Development Plan Steering Group hosted an online interactive Visioning
Event at the end of April. Again we had an excellent response from the local community with over 80 individuals and families registering
to take part.

Thank you to those who made it on the evening – it’s not easy having to use Zoom, and we look forward to a time (hopefully not too far away) when we can host an event in the village hall in person.

But in the meantime, the event was very successful and provided us with a lot of material to start developing a draft Vision and Objectives
for Pembury that can be delivered by the Neighbourhood Development Plan – either through planning policies or by community
actions and projects.

Thinking forward, how would you describe Pembury in 2036?

• What the Pembury Neighbourhood Development Plan is and how it sits alongside the TWBC Local Plan
• Update on proposed development sites
• Consultation period and timeline
• How would you like to see Pembury Parish evolve in the next 15-20 years?

Bring your ideas and have your say via interactive workshops

Thank you for all of the wonderful photographs of Pembury! The overall winner was Philip David with his photograph “Beatiful Autumn colours as sunset approaches” from the Old Coach Road.

Please check out our page with details of all of the photographs submitted. 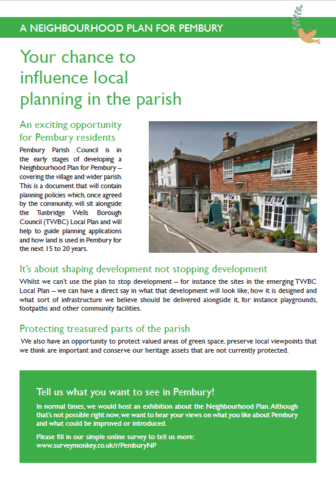 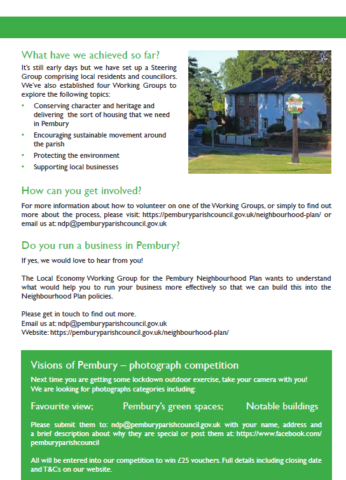 Nigel has played a key role in getting the Pembury Neighbourhood Plan up and running. Read his latest update.

We want to hear your views about Pembury!

The ongoing Covid-19 restrictions means that we are unable to hold any events or exhibitions at the moment, but we still want to hear what you have to say about Pembury as a place to live.

Please complete our online survey: https://www.surveymonkey.co.uk/r/PemburyNP.  It won’t take very long but will provide our volunteers in the different Neighbourhood Plan Working Groups with lots of helpful information.

It’s also an opportunity to share your details with us so that we can keep you updated on how the Neighbourhood Plan is going or follow up with you if you’d like to get a bit more involved.

The competition has now closed!  Thank you to everyone that sent in their photographs.  We had a wonderful selection!  The winner and highly commended photos will be announced in the spring edition of the PVN