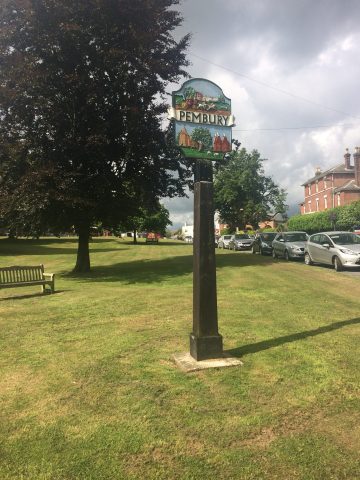 Pembury is a large village in the county of Kent in the south-east of England, UK with a population of around 6,500. It lies within the High Weald Area of Outstanding Natural Beauty and is to the north-east of the town of Tunbridge Wells. The name ‘Pembury’ derives from the Saxon ‘Pepingburh’ or ‘Pepingeberia’, meaning ‘the place of Pepping’s people’. The area was first permanently settled by families from Nettlestead in about 800AD. Previously they had used the Weald as summer pasture, but now they started staying all year round.

The Parish Church, or Old Church, has probably existed since Saxon times but the current building has 12th century origins with 14th century additions paid for by the Colepepper family. The 19th century MP and railway speculator Sir Samuel Morton Peto is buried in the churchyard. This church is small and a long way from the eventual centre of population so the Upper Church was built in 1847 near the Village Green. For many years the steeple on this church was a local landmark but in 1984 it was demolished for safety reasons. The Baptist Church, which has had several non-conformist allegiances over the years, was founded in 1834 and the current building dates from 1884. The Catholic Church was built in the 1960s.

The Colepepper family, who came to national prominence in Tudor times, lived in Pembury for nearly 300 years before moving to nearby Bedgebury in the late 15th century and subsequently elsewhere in Kent. In 1297 King Edward l stayed the night with them at their Bayhall home while on a royal progress. In the 14th century they were by far the largest landowners in the area. At the same time the other large estate, which became known as Hawkwell, was owned by the monks of Bayham Abbey from the 13th century until the Dissolution of the monasteries in 1536.

The other nationally important family who had their origins in Pembury were the Amhersts. Their name may indicate they were some of the earliest settlers as ‘Ham’ is a clearing or settlement and ‘Hurst’ a wood. In 1500 they were yeomen farmers with 20acres in the vicinity of Amherst Bank, but by 1600 Richard, a younger son and a lawyer, had acquired Bayhall where his son Richard built a grand house in 1630. Charles Amherst (1640-1705), a son of Richard jnr and the last Amherst to live at Bayhall, endowed the Almshouses which were built in 1715 and are still in use today. In the 18th century and early 19th descendants of younger sons of the first Richard, who had moved away came to prominence as soldiers and diplomats.

In 1799 Lord Camden, who lived at Bayham Abbey in Lamberhurst, bought the Bayhall estate. This extended his control over nearly all the land between Pembury & Bayham. He, and subsequent Lords Camden, had considerable influence in the area until the 1960s. Also during the 19th century Pembury had three Woodgate vicars (father, son and grandson) whose ministry spanned the whole century, with just one short break.

Apart from the Parish Church, which is Grade l listed, the most imposing surviving building is the Camden Arms. It is situated prominently, opposite the Green, on what was the main road from London to Rye and Hastings and has been serving travellers, as well as locals, since at least Tudor times when it may have been known as the ‘sign of the Cock’. The Manor Courts were held here and in the 18th century, when it was known as the Five Bells, so did the Parish Vestry (the forerunner of the Parish Council). The present name came about soon after Lord Camden acquired the Bayhall estate, of which the coaching inn was part.

Pembury had always been a largely self-sufficient rural community but with the coming of the railways locally, the population of Pembury changed in character and grew steadily in numbers. People like Morton Peto and other business men came to live in the area as they could now easily get to London and the village could now be more outward looking. The population almost doubled between 1821 and 1921 to 1774, but it was after WW2 that the population really expanded with the building of several large housing estates.

The brickworks, the only non-agricultural industry in Pembury, flourished during the second half of the 19th century, but closed in 1939, as did the small pottery that made sanitary ware and tiles. During the 17th and early 18th century there was a thriving cloth industry in the village, as was common throughout the Weald at the time, but there was no direct participation in the local Iron Industry.